Graduations Up, Dropouts Down

In the summer of 2012, Engaging Schools began working with William J. Dean Technical High School in Holyoke, MA. At Dean Tech, which has a predominantly Latino student population, more than 90 percent of students qualify for free or reduced-price lunch. Nearly 50 percent of students receive special education services, 35 percent are identified as English Language Learners, and close to 10 percent are homeless.

Dean Tech turned to Engaging Schools to help address a range of school culture and behavioral issues that were interfering with learning. The faculty adopted Guided Discipline to improve the school culture and climate, with a particular focus on student discipline, motivation, and school engagement.

The work began with the principal, administrators, and other school leaders working with Engaging Schools to define the school’s values, beliefs, and student expectations. Then Engaging Schools gathered all faculty and staff members, including security, food service, and custodial staff members, for a three-day Guided Discipline institute.

The institute helped participants better understand the range of adolescent behaviors that appear in classrooms, depersonalize and de-escalate unwanted behaviors, use effective teacher talk in place of communication roadblocks, and involve the students in solving behavior problems. As a result of the institute, faculty and staff members were able to see their own roles in supporting the students who are most likely to act out. And participants saw that their support can help these students not only manage their behavior, but also develop the academic, social, and emotional skills they need to succeed.

Engaging Schools followed up with coaching and consultation with teachers and administrators who attended the institute. Teachers also used the Engaging Schools book Getting Classroom Management Right.

Changing the behavior of faculty and staff members led to immediate improvements. In just one year (2012–13 data, as compared with the previous year), the four-year graduation rate jumped from 28 percent to 40 percent, and the dropout rate decreased from 15 percent to 10 percent.

Student Outcomes Improve in One Year 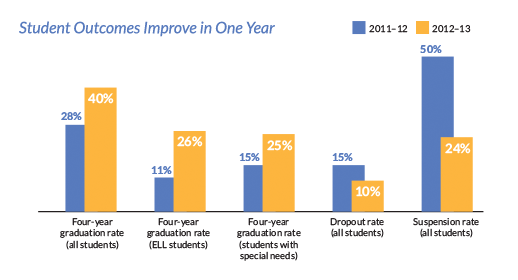