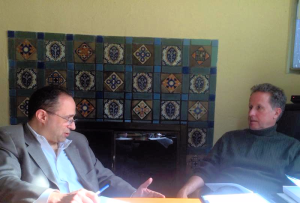 Engaging Schools’ Executive Director Larry Dieringer sat down for a chat with Dr. Daniel Losen, Director of the Center for Civil Rights Remedies at The Civil Rights Project at UCLA. Dan is also the author and editor of influential studies and books about school discipline, most recently Closing the School Discipline Gap: Equitable Remedies for Excessive Exclusion. Larry and Dan talked about their shared focus on developing and sustaining equitable, supportive, and restorative systems of school discipline. The first installment of their conversation, on the nature of disproportional discipline and promising approaches, follows.

Larry: How do you see the nature of the problem of exclusionary and disproportional discipline and why does it matter so much?

Dan: The issue is broader than just exclusionary discipline, and huge disparities in excessive discipline are emblematic of deeper problems. There is the issue of resource inequality—we often see the discipline disparities flow along many of the same lines that resource inequalities flow along. Resource inequalities also led to a legacy of discrimination. There is structural racism, and there are also concerns about implicit bias, the unconscious and unintentional racism that affects our perceptions. At the behavioral level, implicit bias can influence whether educators see a problem in the first place, whether that problem is dangerous or not, and also informs how they respond to that problem. Is harsh discipline necessary? Or a parent conference? Or just direct intervention to move kids along the hallway? Disciplinary disparities are reflective of these deep problems at many different levels.

Larry: So you are talking about some pretty deep seated issues: institutional racism, huge economic disparities, and ingrained belief systems, and yet, you talk about changes that could be made. “Are We Closing the School Discipline Gap?”  chronicles some very positive changes in a relatively short amount of time among school districts during the last several years. What are some examples of the positive changes that you are seeing?

Dan: On some levels, there are some immediate things some schools can do. The research, for example, by Russ Skiba, and the study in Texas (“Breaking Schools’ Rules“) by Tony Fabelo and his colleagues show that even when you control for race, poverty, and whether the school is suspending many kids or just a few, at lot has to do with the attitude of the principals and school policies and practices. Even if you don’t solve all these underlying deep seated problems, there are immediate things that can be done to improve the situation. The truth is that when you suspend students—out of school especially—you are increasing the risk for juvenile delinquency and involvement in the juvenile justice system, and dramatically decreasing achievement scores and the likelihood that they will graduate. These circumstances have long-term implications for those students and their communities, so there are huge economic negatives or positives. If you stop excessive suspensions, you can have some real positive economic gains.

Another example: Baltimore City Public Schools stopped suspending kids for truancy. There is really no educationally sound reason to suspend a truant kid; somewhat disengaged youth are just pushed further out the door. A lot of kids get suspended for lots of minor offenses. When they are sent home, there is no adult intervention to help correct the behavior, so they don’t come back to school any better off. They come back further behind academically and more disengaged. Their relationship with the teacher may have also suffered. The parent-teacher relationship may have suffered. All the research says that there are alternatives, and that kicking large numbers of students out of school, especially for minor offenses, is very counterproductive to what we are trying to encourage, including safety. There was a study in Chicago that found that even among schools serving kids from the highest crime neighborhoods, the schools that fostered supportive school-family and teacher-student relationships and trust felt the safest and had the lowest suspension rates. The safest schools are the ones that use suspension less often even when they are serving kids from these high crime neighborhoods.

Larry: Even in high crime or highly impoverished neighborhoods, are there different approaches among the schools in those communities about how to handle behavior issues?

Dan: We should care about not just achievement scores, but about whether kids graduate with real diplomas so they can gain meaningful employment. As Baltimore and other districts have found out, when they reduced suspensions, especially for minor offenses, graduation rates went up. In our book, we point out that Denver embraces Restorative Practices. Over the course of six years, it went from a pilot program in just a few high schools to a systemic approach that all classroom teachers used to improve relationships in their classroom and improve student engagement. Test scores in every subject went up for every racial group. This idea that we have to kick out the bad kids so that the good kids can learn is myth that’s busted when you have good research showing that there is an alternative approach. In Denver, the rates of suspensions came down for all racial groups, and they came down more for the black students, which was initially the highest suspended group.