Free viewings of “Selma” for 7th, 8th, and 9th graders 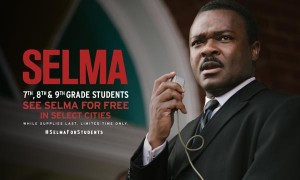 Through an initiative that started in New York City and is spreading to metropolitan areas nationwide, seventh, eighth, and ninth grade students able to produce a school ID or report card will be able to see the movie “Selma” at no charge. Recently released to great critical acclaim and some controversy, “Selma” focuses on events in 1963 during which Dr. Martin Luther King Jr. and his followers joined forces to complete an epic march from Selma to Montgomery, and how their efforts resulted in President Lyndon Johnson signing the Voting Rights Act of 1965.

In this article, BET describes the expansion of the free viewings and their sponsorship by Black business leaders. To check whether your city is offering free viewings, visit the Selma Student Tickets website or track the hashtag #SelmaForStudents on Twitter. More cities will be added tomorrow (January 14, 2015).