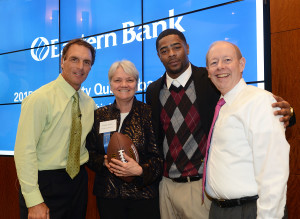 Engaging Schools was one of the organizations recognized by Eastern Bank at its annual Community Quarterback awards ceremony. We were honored for our work helping the Eugene Wright Academy, a middle school in Chelsea, MA, address schoolwide discipline and student support, a project supported by Eastern Bank Charitable Foundation.

The awards ceremony included legendary football quarterback Doug Flutie throwing a signed football to each organizational representative, who in our case was Director of Development Elaine Lamy, who reported, “A surprise during the event was Malcolm Butler, the Patriots player who basically won the Super Bowl this year in that fantastic interception from the Seahawks during the last 20 seconds of the game. Not surprisingly, the crowd went wild when Malcolm showed up. If you’re a football or Patriot’s fan, you’ll know what I mean…”

Elaine is pictured above, with Doug Flutie, Malcolm Butler, and Richard Holbrook, CEO of Eastern Bank. Many thanks to Eastern Bank Charitable Foundation for supporting and recognizing Engaging Schools!